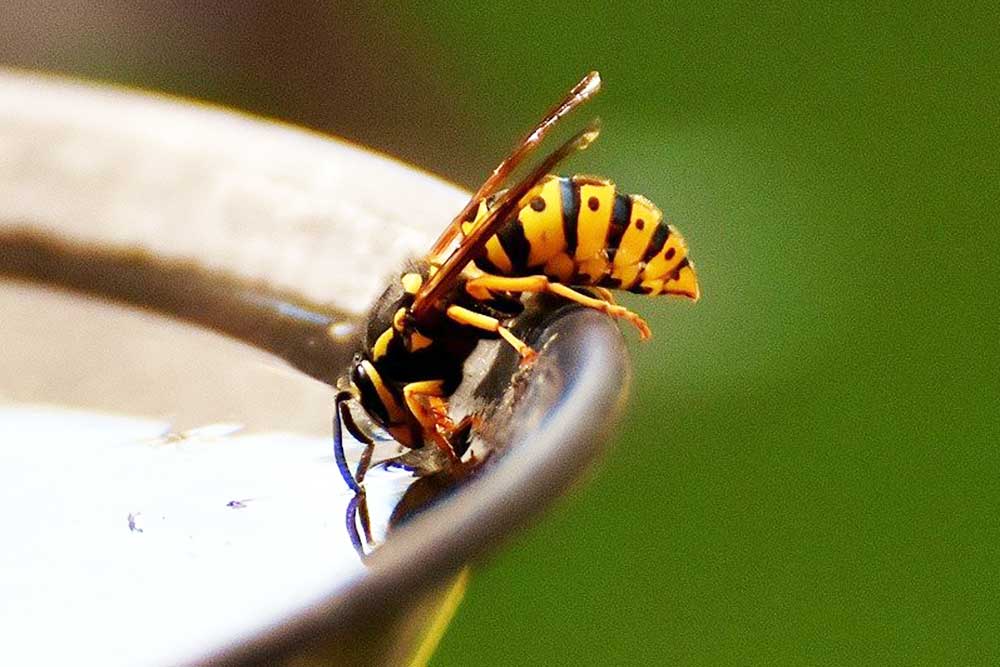 The Difference Between Bees and Wasps

At first glance, many people might understandably confuse bees with wasps. After all, they both share similar colors (black/dark brown and yellow), make a buzzing noise when flying and both of course, can sting those who disturb them.

However, there are actually more differences between these two flying insects than most might realize.

Your traditional honey bee has an oval-shaped body that can described as somewhat hairy with more of a gold-yellow color and dark brown/black (depending on the species) colored bands. The honey bee also has long and chubbier legs.

A wasp on the other hand, has a slimmer, more slender and smoother body (less hairy). A species of wasp commonly found in North America and in Arizona is called a “Yellow Jacket” because it has a bright yellow and black striped body. However, here in the Phoenix, AZ metro area, we also have another species of wasp called the Paper Wasp. There are a variety of paper wasp species here in the Sonoran Desert, including the yellow paper wasp, the Navajo paper wasp and the Arizona paper wasp.

Generally speaking, honey bees and wasps are not considered to be aggressive insects. However, that doesn’t mean they both won’t sting you when they feel you are a threat to themselves or their colony. That said, wasps are known to be more easily provoked than honey bees.

When a honey bee stings you, it will die. Why? That’s because a honey bee has a large, barbed stinger that is impossible for the bee to back it out once it enters your flesh. As a result, when the honey bee flies away, the entire stinging apparatus is torn from the honey bee’s abdomen and left in your skin. It is for this reason the honey bee dies.

A wasp can both sting and bite. A wasp may bite in an attempt to get a better grip on its victim so it can jab their stinger in deeper. Only female wasps have stingers. Unlike honey bees, a wasp’s stinger is not barbed and therefore they won’t lose their stinger when stinging. This enables a wasp to sting you multiple times, when provoked.

How to Avoid Getting Stung

Generally speaking, avoid wearing bright colors such as yellow, purple, red…instead, wear white, beige or other light colors when near bees or wasps.

Also, avoid showering with perfumed soaps and shampoos in addition to not using colognes, perfumes and scented deodorants.

If you’d like to know more about the differences between a bee and a wasp, call the bee removal professionals at The Beehive, Bee and Wasp Removal today!

Why Do Beekeepers Charge to Remove Bees?

Why do Bees keep coming back to my home and what can I do about it?

How to Get Rid of Bees around your Barbecue Grill