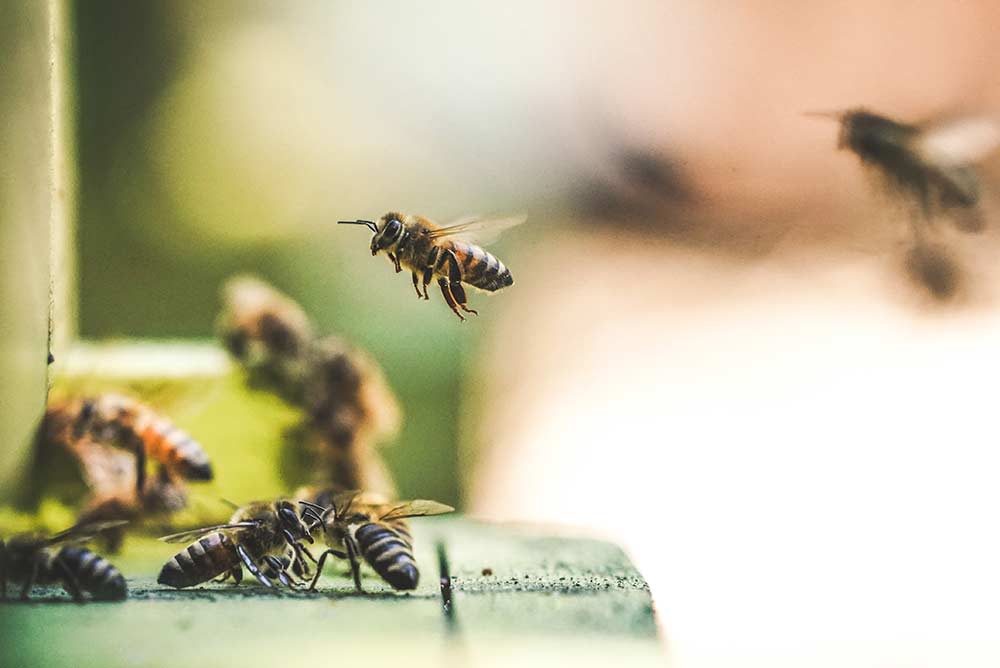 What to do when Stung by a Bee?

Honey bees are present in our lives throughout the Phoenix, Arizona metro area. However, when the weather warms up, bee activity significantly ramps up as well. That’s because in the Spring, as temperatures begin to rise, honey bees begin to forage for food and water.

When your family and friends are out and about, particularly around your home’s property, you may begin to notice more bee activity.

A popular concern for many is the risk of getting stung by the honey bees in your immediate vicinity. Of course, this concern may be heightened for those who are allergic to bee stings.

What is a bee sting?

In a nutshell, a bee sting is the punctured area of skin and the pain associated with it, resulting from the stinger of a female bee.

Can a male bee sting?

Actually, no. That’s because male bees don’t have a “stinger”. In fact, only female bees have a stinger because it is actually the organ female bees use to lay eggs.  However, unlike the queen, these eggs are unfertilized which means that they end up producing “drones” or male bees. A male bee’s function is to fertilize the queen bee’s eggs. The queen’s eggs end up producing other queens or worker bees (female).

Female worker bees, among other things, are responsible for protecting the queen. Since the queen is the only bee who can lay eggs that produce more female bees (queens and workers) this makes her safety a top priority in her colony.

Why do Bees Sting?

Honey bees sting a perceived threat to defend their hive. Otherwise, honey bees will not usually sting unless they are provoked.

Can a Bee Sting more than Once?

A worker honey bee cannot sting a human more than once without subsequently dying. Why? That’s because the worker honey bee’s stinger has a barbed end, like a fish hook. This results in the stinger becoming lodged in human skin, releasing venom and pheromones signaling other bees nearby to join in the attack. Once a worker honey bee stings a human with the stinger stuck in the skin, as it attempts to fly away, this tears open its abdomen, leaving behind its venom sack and its abdominal organs. It is for this reason a worker honey bee will die after stinging a human.

What to do if you are stung by a bee?

It’s always best to remain calm when stung by a bee. That said, one of the first things you can do is to remove the bee’s stinger as this will prevent the release of additional bee venom into your skin.

You can try using the edge of a credit card or your fingernail to remove the stinger. Try applying ice to your sting as it should reduce swelling and even relieve pain from the sting.

If it turns out that you experience difficulty breathing, feel dizzy or nauseous, you could be having an allergic reaction. At this point, you may want to seek professional medical attention immediately.

We offer live bee removal and have extensive experience and expertise in removing bees throughout the Phoenix metro area.  Call us today at 602-600-5382.

How to Safely Remove Bees from inside Your Chimney

3 Good Reasons to Hire a Beekeeper Remove Your Bees